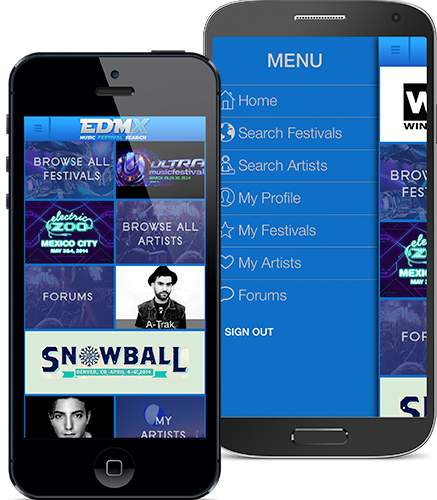 Electronic Dance Music (EDM) fans are known for their intensity.  This intensity is evident during live performances at concerts and music festivals at which trance, house, techno, breakbeat and hardcore are the main attraction.  But, the intensity also is seen in EDM media and in fan-to-artist and fan-to-fan interactions.

This passion for the genre is the driving force behind EDMX, a mobile application that allows fans to browse some 175 festivals around the world, discover artists and DJs, build lineups and meet like-minded people.  App users also can check-in and earn badges to keep track of festival life, be alerted when artists and events have news and stream tracks from favorite artists and listen to new sounds.

“Dance music has always had that magic around it … maybe because it wasn’t on the radio and widely-available at first,” said EDMX co-founder Scott Richmond.  “It’s a fun culture.  People are partying and having fun and the music is fun.  It’s a natural outgrowth of the millennial culture.”

The explosion of social media, and the smart promotion of music through it, also has been key, said Scott, adding, “EDM artists are some of the most skilled on social media.”

Scott got his start in the music business in 1992 when he began producing raves.  The next year, he co-founded Satellite Records in New York City’s East Village.  Satellite grew from a small store into a multimillion-dollar small chain with additional stores in Boston and Atlanta.  Scott also co-founded SatelliteRecords.com, the first online retail site of its kind.

In 2008 and 2009, seeing the difficulties of breaking new talent on popular dance music download sites, Scott and his team transformed the Satellite Records brand into the groundbreaking digital download site SatelliteEDM, which featured curated downloads.  These were necessary, Scott said, “because there was no one giving you guidance like you used to get in record stores.”

That experience, combined with EDM consulting work and two decades of producing live dance events, inspired Scott and his co-founders to create EDMX.

“Our mission is to bring the world of EDM (music and culture) into one app,” said EDMX co-founder Will Wong.

In addition to being a Joynture member, EDMX also is utlizing Joynture’s mobile development services to continue enhancing the app.  “It’s great to be working with a dynamic company like EDMX that is taking advantage of some of the most cutting-edge and engaging mobile technology,” said Joynture co-founder Kyle Riggle.