Underneath It all: A Brief History of 48 Wall St. 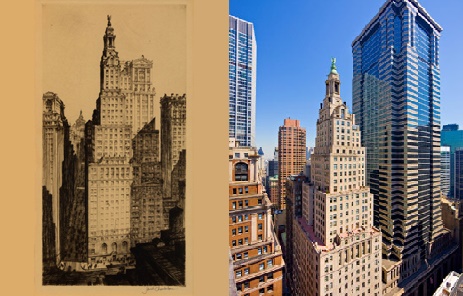 Last week, when the unsightly scaffolding came down in front of 48 Wall St., it got us thinking more about our building, its architecture and history.

Our skyscraper is deeply embedded in America’s financial history. The Bank of New York, founded by Alexander Hamilton in 1784, is famed to be the oldest bank in the state of New York and second oldest in the country. The bank of New York moved to the corner of Wall and William streets in 1796.

Our building, built in 1929, is the third Bank of New York headquarters on the site. In 1997, the firm moved down the street to 1 Wall St. 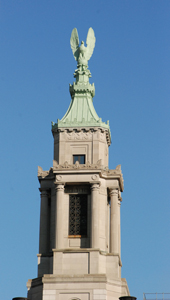 Society architect Benjamin Wistar Morris designed the current 48 Wall St. “as a headquarters that would reflect the bank’s eighteenth-century origins,” (skyscraper.org). This translated into a monumental, colonial-revival structure, 32 stories tall. The peak of the building is the only colonial style cupola in the Lower Manhattan skyline, ornamented with a Corinthian temple and copper eagle. Seeing this marvel is difficult today due to the surrounding buildings, but can be viewed from behind when walking south on William Street between Fulton and Maiden.

The Museum of American Finance on the first floor occupies the building’s original banking hall where individuals can brush up on their economic history. Visitors tour the main hall of the museum, a grand, elaborately decorated room where citizens once visited tellers to handle their finances. The banking hall hosts both touring and stationary exhibits and is outfitted with eight murals depicting the story of American commerce.

Beyond the museum, though, classic colonial décor has given way to a modern environment. The technology and media advances of the 21st century provided the FiDi with the means to satisfy a new demand: housing innovative companies. Tech inspired organizations like Joynture occupy many floors in FiDi buildings, rightfully classifying the area as Silicon Alley. Spaces such as Joynture’s Hamilton room, a replica of Alexander Hamilton’s library, demonstrate the dual appreciation of local history and the desire to progress.

“Our building is a historic landmark. What better location to drive success than the birthplace of American finance?” said Joynture cofounder Kyle Riggle.